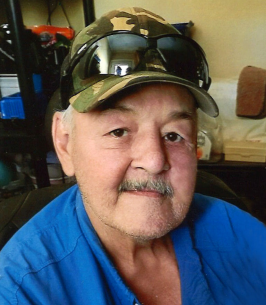 Kim was called home to Heaven on October 20, 2022. He was reunited with his family that left before him. Just like he dealt with all experiences in life, Kim managed his illness with strength and grace, and wanted to spend as much time with his loved ones as possible. Kim was a brave warrior. On his final days, he was surrounded by his wife, sons, granddaughters, and daughters-in-law, who he adored more than anything else in the world.

A genuinely self-made man, Kim was a master of all talents. He represented his country as a Corporal in the US Marine Corps serving in the Vietnam War. Kim also was a Machinist, Painter, Sandblaster, Entrepreneur and even a DJ. Kim was an avid Trump supporter. He was a #1 Patriot and loved his country!

The simplest treasures in life, such as his family, brought the greatest joy to him. Kim was a loving husband, father, grandfather, great grandfather, brother, and fur daddy. Kim enjoyed spending time with his boys, grandchildren, and great grandchild. He thoroughly enjoyed hunting, fishing, coaching baseball and watching NASCAR. He also enjoyed showing off all his big buck photos, loving on all his fur babies and telling stories of himself or his boys growing up. Kim had a strong passion for artwork, he chose to wear his art in ink on his skin. He was always complimented on the creativity and color of his tattoos.
His love for his family and for life will be remembered long after his passing.