To share your memory on the wall of Rickey Huffty, sign in using one of the following options:

Print
Private family memorial services for Mr. Rickey Huffty, Sr. of Monroe, LA will be held at a later date. Arrangements are under the direction of Griffin Funeral Home Monroe.

Mr. Huffty was born September 2, 1954 and passed from this life... Read More
Private family memorial services for Mr. Rickey Huffty, Sr. of Monroe, LA will be held at a later date. Arrangements are under the direction of Griffin Funeral Home Monroe.

Mr. Huffty was born September 2, 1954 and passed from this life on May 25, 2021 in Monroe, LA at the age of 66. He was a man who lived the fast life and struggled with addiction throughout his time here on earth. Dad, you fought your fight, now go rest easy. He will be greatly missed.

He is preceded in death by his father, Kent M. Huffty; his mother, Betty J. McAlpin; his grandmother, Olie McAlpin; his nephew, Austin B. Huffty; and his uncle, Seth Huffty.

The family would like to express their gratitude to the directors and staff of Griffin Funeral Home for their help in arranging our father’s service details.
Read Less

Receive notifications about information and event scheduling for Rickey

There are no events scheduled. You can still show your support by sending flowers directly to the family, or planting a memorial tree in memory of Rickey Huffty Sr..
Plant a Tree

We encourage you to share your most beloved memories of Rickey here, so that the family and other loved ones can always see it. You can upload cherished photographs, or share your favorite stories, and can even comment on those shared by others.

Posted Jun 07, 2021 at 04:16pm
I am sad to hear of Mr Ricky's passing. I helped him as much as I could with his insurances and even helped him move once. He was always kind to me and was very giving. He's quite a character and he had quite a life. He was always up for a cup of coffee and a good story. I'll miss that phone call and ol raspy voice saying," Tyler! How ya doing son!"
God rest his soul. Blessings and condolences to the family.
Tyler Holloway
Comment Share
Share via: 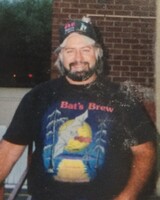