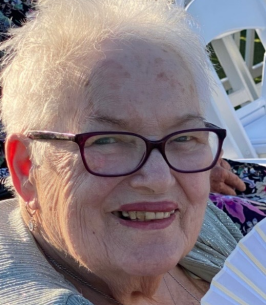 Margo Charlotte Archibald Lee, 88, passed away peacefully at home on May 30, 2022, surrounded by loving family. Margo, also known as Mom, Momma, Madea, Gertie, Gram, Grammy, and Granny, was born on April 17, 1934 in Coronado, California to Robert Eldon Archibald and Dora Jeanette Lightfoot Archibald, the third of their three daughters (Suki and Sally were her older sisters). Margo lost her mother as an infant and was raised by a beloved aunt until her father married Lucia D’Amico and gave her two new sisters, Toni and Pat. Her father owned the movie theater in Coronado, and Margo spent her childhood getting to watch every new movie, while her two sisters were old enough to serve as ushers and concessionaires. After eighth grade, she traveled to Kodiak, Alaska to visit the aunt who had raised her for the first two years of her life. Once there, she decided to stay. Many of her Lightfoot cousins had also relocated from Idaho to Kodiak, Alaska, and she had many great adventures there during her high school years. After high school, she attended the University of Alaska for two years before returning to Kodiak to work at the Bank of Kodiak and help with the movement for Alaska statehood.

In 1956, she attended a July 4th USO street dance and met her Louisiana sailor, Edward David Lee. Ed was stationed at the Naval Air Base in Kodiak at the time, and they quickly fell in love. They married in Kodiak on February 16, 1957. After Ed was discharged, they traveled across the country to settle in Louisiana. Ed obtained a position with Southern Natural Gas Company, and was quickly transferred to St. Bernard, Louisiana. Ed’s career took them to White Castle, LA; back to St. Bernard; Centerville, LA; and Gwinville, MS. Margo was primarily a homemaker, but worked occasionally for the U.S. government. Margo made lifelong friends wherever she lived. She loved keeping up with friends and family; she was an avid letter writer but easily switched to new technologies such as email and Facebook when they became available. Margo was friendly and inquisitive, with a remarkable gift for figuring out which people she and a stranger knew in common (even on a small boat in the middle of the Yucatan).

Margo and Ed enjoyed a very active retirement, spending several years at their beloved Blueberry Hill property in Mississippi before relocating to Swartz, LA. They traveled all over the United States, including several trips back to Alaska. Ed and Margo also enjoyed trips to Hawaii; England; and St. John, USVI; while Margo also got to visit the Yucatan Peninsula of Mexico. In Swartz, they were active at St. Lawrence Catholic Church, where Margo was a member of the Altar Society and served as church secretary for many years. They also supported the Strauss Little Theater and the Monroe Symphony Orchestra. Most of all, they enjoyed hosting large family gatherings. As their family grew, every birthday and graduation was celebrated with special meals and cakes.

Margo’s hobbies included playing games and cards (including a very competitive game of Liverpool a month before her death), reading, painting, calligraphy, photography and family albums, going to the movies, counted cross-stitching, knitting, crocheting, and watching Jeopardy. She hosted a monthly Pokeno game with many of her friends, and always hoped to win the “Biggie.” Margo was a nature lover and especially enjoyed birds. A bald eagle flew over her house a few minutes after her death, a fitting tribute. Her last big travel adventure was a two-week road trip to California in the fall of 2021 with her daughters and sister to attend a nephew’s wedding. She was an active poll worker until a few years before her death and was a big believer in social justice causes.

Margo was survived by numerous nieces and nephews who loved her dearly. Margo was adopted by many beloved pets over the years and left behind three dogs who will miss their momma: Trixie, Tippy, Gypsy.

The family will receive visitors at the home in Swartz on Thursday, June 2 from 2-5 pm. A funeral mass will be held on Friday, June 3 at 11 am, followed by interment at Loch Arbor Baptist Church Cemetery where many of Ed’s family are at rest.

Donations may be made in Margo’s name to St. Lawrence Catholic Church, PO Box 554, Swartz, LA 71281, the Strauss Little Theater, 1300 Lamy Lane, Monroe, LA 71201, to any humane society, or to any organization providing humanitarian relief to the people of Ukraine. The next time you are at your favorite Mexican restaurant, order a Margo-rita and share some of your favorite memories of this remarkable woman.

Special thanks to her dedicated caregiver, daughter Patty Lee, as well as medical staff at St. Francis Medical Center and St. Joseph Hospice for their nurturing end of life care.