To share your memory on the wall of Gerald Charles, sign in using one of the following options:

Gerald spent most of his life in Shongaloo, LA where he served as the school custodian from 1968-1998.
He was a member of Mt. Paran Baptist Church in Shongaloo where he spent several years teaching Sunday School with his wife, Jo Ann. In his younger years, Gerald was an avid gardener and along with Jo Ann enjoyed many hours working their garden and canning the vegetables that they raised. In his later years, Gerald loved watching Western movies and TV shows as well as spending time with his beloved granddaughter Kaitlyn.

He is preceded in death by his wife, Jo Ann Charles; parents, Claude and Frenchie Charles; in-laws, George and Letha Dick; brother, William “Bill” Charles, as well as his sisters, Claudia Pickard and Ava Miller.

Those left to cherish his memories include his daughter, Peggy Holland and husband Vern of Eros, LA; son, Wesley Charles and wife Wendy of McKinney, TX; sister, Ann Wright of Springhill, LA; grandson, Josh Kirkpatrick and wife Dayle of Neosho, MO; granddaughter, LeAnna Broussard and husband Daryl of Bridge City, TX; granddaughter, Kaitlyn Kirkpatrick of Eros, LA; and Michael Gray of Branson, MO who was like a grandson to him.
The family would like to thank the nurses of Professional Hospice for their care of Gerald during his time battling cancer.

Receive notifications about information and event scheduling for Gerald

There are no events scheduled. You can still show your support by sending flowers directly to the family, or planting a memorial tree in memory of Gerald Wesley Charles.
Plant a Tree

We encourage you to share your most beloved memories of Gerald here, so that the family and other loved ones can always see it. You can upload cherished photographs, or share your favorite stories, and can even comment on those shared by others. 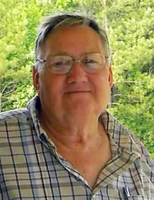