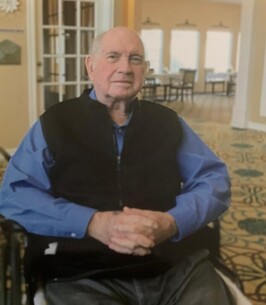 Funeral services will begin on Monday October 17th at 11:00am with visitation at 10:00am at Griffin Funeral Home in West Monroe Louisiana. Graveside services will be at the Northeast Louisiana Veterans Cemetery in Rayville LA @1:00.
The family would like to thank the Staff of Savannah Grande of West Monroe, Caring Hands Hospice and the dedicated ladies who sat with him. Each of you were a Godsend.
George Stuart Wade, 88, of West Monroe, Louisiana passed away on October 13th after a lengthy illness.
George was born on September 15th, 1934, to Troy and Clara Wade in Collins MS. He attended Salem HS and graduated in 1952. He went on to Jones Junior College and then to Mississippi State University for a semester before joining the Navy. George served during the Korean War on the USS Pickaway and the USS Noble. Eventually, he finished his Business Agriculture degree in 1960.
While serving in the Navy he married his wife of 66 years, the late Martha Eunice Wade.
After finishing college, he took his first job as County Agent in Koscuisko MS in 1960. In 1967 he moved his family to Columbus MS to become manager of Lowndes County Co-op. He retired from the co-op after 20 years and opened his own farm supply business.
During his time in Columbus, he served on several local committees and boards and was a member of many civic organizations. He was a member for Fairview Baptist Church and served as a deacon and was a choir member.
In 1997 George was elected mayor of Columbus until 2001. He eventually retired and he and Eunice relocated to West Monroe, LA to be near his son’s families and grandchildren. While living in West Monroe he was a member of First West Baptist Church and a member of Woods Watson’s life group.
George is survived by his two sons Steven Wade (Kelly) and Randy Wade (Constance). He has three grandchildren Sam Wade (Kelsie) of Lake Charles, Valerie Garcia (Gabriel) of Saginaw TX and Brad wade (Marion) of Quinlan Tx. And three great grand children George, Rowan and Luca.